Released on the virtual console, “Pokemon Red and Green” is the origin of the Pokémon series, which is still very popular, and is a masterpiece that created the basis of various systems that continue into the subsequent series. However, it is a work from 20 years ago, so there are many parts where the selfishness has changed greatly compared to XY and ORAS. As far as I can think of, I tried to list the differences between the recent Pokemon series and the first generation.

This is important. After BW, the machine was designed to be used no matter how many times it was used, but once the machine was used, it disappeared. There are some machines that can be bought at department stores, but there are a few, but most are single items. Well, the first purpose machine is not a lot of things originally, so not all are important, but there are also iron plate machines such as “10 man bolt” and “Reito beam”, It is necessary to think carefully about who makes them remember. It should be noted that the Hidden machine does not disappear even if it is used (if it disappears, it will get stuck). However, there is another trap in the Hiden machine, and since there is no “forgetting father” in the first generation, the Hiden technique that you once learned cannot be basically forgotten.

Tokukou and Tokubo are unified with “Tokushu”

The concept of Tokukou and Tokubou was created from gold and silver. Therefore, there is no “Tokukou” or “Tokubo” on the original status screen, and instead there is a status of “Tokushu”. This Tokushu plays both “Tokukou” and “Tokubo” roles, and because it has different actual abilities from the current Pokémon, Fudin’s special endurance is higher than that of Cavigon’s special endurance than now. It is low. Even though there are statuses related to attacks and defenses, there is only one status related to special attacks such as magic (such as mental strength), so the setting is relatively major in RPG, so it reflects that. Seem. 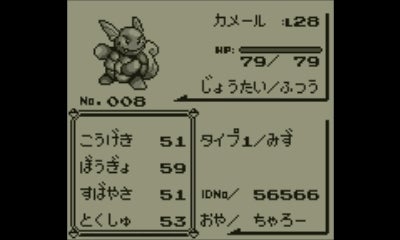 Even if you take one status screen, it is very different from the current Pokemon

It was from Ruby Sapphire that the concept of characteristics was created. For example, a Gengar with “Fuyu” is invalid on the ground, but in the first generation there is no characteristic, so it will be outstanding. However, in the story, it is rare that you can clear it without playing while paying attention to the characteristics, so it should not affect the play.

Physical and special are decided for each type

It was from Diamond Pearl that we were able to distinguish between physical and special techniques for each technique. Specifically, grass, fire, water, electricity, ice, esper, and dragon types are all special skills, and normal, rock, ground, poison, fighting, flying, insects, and ghost types are all physical skills. Evil ・Steel is gold and silver, and fairy is added in XY, so it does not exist in the first generation. After Daipa, “Takinobori” became a physical skill, but in the first generation it was a special skill.

Some types have no good technique

It may be better to say that it is one of the defect balances that often exist in the original Pokemon, rather than the difference from the current Pokemon. First of all, the first Pokémon are out of balance. People may disagree about whether or not the current Pokemon have a good balance of competition, but at least the first Pokemon was far inferior to the current Pokemon in terms of the balance of competition. This is one of the reasons. Even today, special rocks and physical water have little skill and sometimes suffer from lack of firepower, but the lack of skill in the first generation is not that ratio. Dragons, insects, and ghosts are especially prominent, and the most powerful techniques are Ryuri no Ikari, Double Needle, and Night Head. Before the dragon was the strongest, it had to be skillful in the first place. The dragon was set to be a great effect on the dragon since the first generation, but it is set to die completely because the technique is only the anchor of fixed damage. In the first generation, the only weaknesses of the Esper type are insects and ghosts, but since the technique is disastrous as described above, there are virtually no weaknesses. To make matters worse, the ghost-type technique is buggy and ineffective. This is the reason why the first Esper type raged (it is no exaggeration to say that the evil and steel types were added with gold and silver to end the first generation of the Esper type).

There is no dash that can be taken for granted nowadays. Therefore, if you are used to the current Pokemon, you may feel that the tempo is quite low. For the time being, if you proceed to Cuchiba City where there is a third gym, you can get a bicycle, so it will be much better. However, there are no convenient buttons in the first generation, so it’s a little troublesome. Well old games are by far the slowest of tempos. I have to give up.

The rucksack will be full soon

Note on adventure. You can carry up to 20 items in your backpack. In addition, all the consumables, valuables, and machines are handled together as a crap, so the rucksack quickly becomes a pan. If the backpack is full, you will not be able to pick up items, so it is recommended that you always store your items on your computer when you search Sylph Company. Similarly, the box for depositing Pokemon will soon fill, so be careful. There are 30 Pokemon in one box. This is the same as other series, but in the first generation, if the current box is full, you will not be able to get new Pokemon. Therefore, when the box is almost full, you need to switch it yourself. It is annoying that a report is written each time it is switched. By the way, I’ve been addicted to the explanation forever because I saw a grandfather’s demo of getting a beadle with a box full.

Another, the first generation Pokemon has four versions, red, green, blue, and Pikachu, so you may wonder which one to buy. Therefore, I will describe the differences between the four versions.

Which series should I buy?

In conclusion, it doesn’t matter which one you choose. It is rare in the series that Pokemon that is not a legend is drawn on the package, but even if you buy the green with Fusigibana, you can choose a lizard or a turtle without problems. There is no difference in the legendary Pokemon that appears, and the story does not change. Basically, the difference between the original work and the minor change version of the Pokemon series is larger than the latest work, so whether it is blue or Pikachu in the first generation is not as different as emerald or platinum. If I dare to make a difference, the following points are different.

Different types of Pokemon that appear

The biggest difference. In the Pokemon series, there are a certain number of types of Pokemon that do not appear in any version, and it is not possible to complete the picture book with one software. Of these, Pokemon that does not appear in red and green complement each other, and if you have 2 software, you can align all Pokemon (it is natural because it was originally 2 versions). Blue and Pikachu do not have such a complementary relationship, so it is a little troublesome to aim for completeness. Blue is a little attractive that you can certainly get the Kentaros that is hard to get in other versions by in-game exchange (so-called “Gyuta”). You can only get one of the Osanke and Fossil Pokemon, so you need to replace it if you complete it, but only the Pikachu version, you can get all three of the turtle, charmander, fusigitane in the story.

The red and green dot paintings are the same, but the blue and Pikachu are reprinted with Pokemon dots. Although each has its own merits, the quality of the blue and Pikachu dot paintings has improved over time. The Pikachu version’s vibrant Pokemon graphics are especially worth a visit. However, it is only the other party’s graphic that differs from version to version, and the graphic on your side does not change in any version. This graphic on my own side is a rough thing of dots again, to be clear, it is Shovoi. This is not a level where the excuse “I’m an old game” or the like is valid, and it’s still terrible considering the level of graphics at that time. Parschen, whose aspect ratio is obviously changed, suddenly thickened lizard, Thunder with too little writing even though it is a legendary Pokemon, and Fushigibana who is too messy to know what it is, become too sad and sad. It’s a funny story right now, but when I think about it, it’s easy to feel that I should have modified this graphic before redrawing the graphic on the other side.

In this way, the Pikachu version focuses on the contact with the popular Pokemon “Pikachu”, so the color is quite different from the other three versions. There is no big difference between red, green and blue.

Played To Heart after a long time. M...